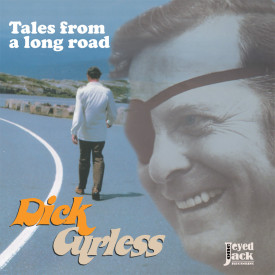 Tales from a long road

Side A:
(Drinkin' Beer and) Singing a country song
Drag'em off the interstate, sock it to'em
Six days on the road
Rocky top
Truck stop
A Tombstone every mile ('70)
Traveling light

Side B:
Jukebox man
Leaving it all behind
Hot springs
Woman don't try to sing my song
Country music man
Chick inspector (that's where my money goes)
Golden girl

Dick Curless (1932-1995) has one of the deepest and most versatile voices in the whole history of country music.  His beginnings at Event Records in the mid 50's already show him as a magnificent singer and songwriter, something he proved in the 60's especially in his years at Tower Records, from 1965 to 1968, with true country anthems such as A TOMBSTONE EVERY MILE, TRAVELIN' MAN or BURY THE BOTTLE WITH ME.  In those years he was part of the Buck Owens All American Show, with whom he toured live throughout the United States.

In 1969 he signed with Capitol Records, a company with whom he released no less than 5 studio LPs and one live between 1970 and 1973.  In those LPs Dick developed his talent in an exceptional way, counting with a luxurious production, and becoming one of the main names of the Truck Drivin' Country, which is not surprising because Dick knew well the life of the eight-wheel drivers, a profession that he was alternating with the music during his first artistic years.

This LP gathers 14 of the best songs from that period of Dick Curless, songs about roads, trucks, alcohol, women and jukeboxes that, despite being the highest point of his artistic career, have never been vindicated at the level they deserve