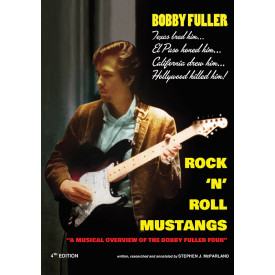 A great deal of effort has been undertaken to once and for all extricate all the myths, inaccuracies and inconsistencies
that have engulf the events surrounding the Bobby Fuller Four and the death of its leader.
This has been made possible by the input of many individuals who were there at the time who
either witnessed the events unfold firsthand or who were actually involved themselves.

Bobby's recordings are all discussed and the facts surrounding them thoroughly documented.

This 4th Edition has also been re-formatted for an easier read and quicker reference.

Previous editions were only available as an import from Australia,
Nor-Va-Jak Music solves this issue by publishing and distribution of this edition from the U.S.A.