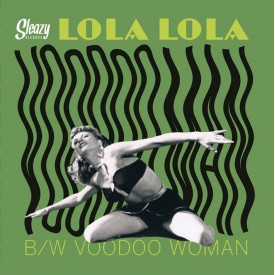 After an inflamed début with "Money in the Can" and a well received "Sweet Lovin'", their second 7", more closely infatuated with the "popcorn" sound, Lola Lola return to records under the sign of Voodoo, a classic motif in Rock'n'Roll imagery, yet one which is always appealing and current, probably due to the ability to bewitch which they both share.

Once again with Nuno Riviera at the helm of the mixing desk, and now with texan Mike Mariconda mastering, this new single by the Porto band brings us "Voodoo Man", a catchy Rhythm & Blues number to enjoy on the radio or the dancefloor, which seduces you from the first listening and quickly makes your body move.

Flipping the record, Lola Lola pay tribute to Curtis Knight, with their take on "Voodoo Woman", a magnificent and heartfelt prayer by a needy soul, which they convey with the rawness innate to great tunes.
Still under the Sleazy Records imprint, and wrapped in fascinating artwork by experienced designer Jordi Duró, the Portuguese band start the year in the best way possible, presenting us with a captivating double-sider, to listen again and again, because good things are timeless.