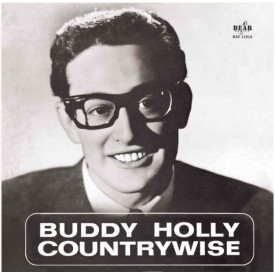 Side A:
Down The Line
Flower Of My Heart
Door To My Heart
I Gambled My Heart
Love's Made A Fool Of You - bonus track

Side B:
I Wanna Play House With You
Soft Place In My Heart
You And I Are Through
Gotta Get You Near Me Blues
Heartbeat - bonus track

10inch LP (limited edition) in our 11000-series.
• Extremely rare Dutch 10" album release from 1965.
• At that time, only a few hundred copies were pressed by Deutsche Grammophon .
• For a long time it was unclear whether there was 'legal' release or just a bootleg that circulated in the 1980s.
• Duo recordings of Bob Montgomery and Buddy Holly from 1954/55, released on the Dutch Coral-Label as 10"LP.
• The two bonus tracks on our re-issue are written by Bob Montgomery.
• Reproduction of the rare original album cover art, designed for the Durtch market
• Painstakingly remastered for highest fidelity and pressed on high quality vinyl!
• Limited to 1,000 copies.

Was this album really released in the mid-1960s in the Netherlands? For a long time collectors suspected that there was no legitimate 1965 Buddy Holly 10"LP at all, but only a cruel sounding bootleg album.

At the latest with Bear Family's re-release of the Coral album from Holland, it's obvious: we're talking about a legally flawless record, which must have been pressed in an extremely small edition.
’Countrywise' contains eight C&W songs recorded by Buddy Holly and Bob Montgomery during 1954/55, long before the era of rock 'n' roll and Buddy's first major chart success, That'll Be The The Day from 1957. Two or three years earlier, two teenagers had fun playing guitar and singing Country & Western tunes. Also together with Bob, Buddy appeared for the first time at a local radio station in Texas, in the 'Buddy & Bob Show'.

With the exception of I Wanna Play House that Buddy sings alone, these songs are duo recordings of Buddy and Bob. Later, Bob wrote Heartbeat (NC 93281) for Buddy, and Buddy's latest success, Love's Made A Fool Of You You (NC 93810), was the result of the collaboration of the two. The songs on this LP were recorded at home with a standard tape recorder. Bassist Larry Welborn was part of the original three-piece line-up.

The accompaniment, as we hear it here and now, is for the most part the work of Norman Petty, Buddy's former A&R agent. With the help of the Fireballs he put a new sound carpet behind Buddy's singing. We hope you like Buddy Holly ’Countrywise’.