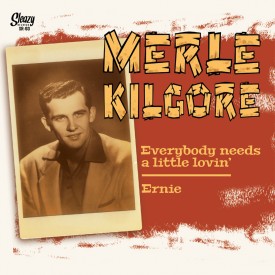 Everybody Needs A Little Loving / Ernie

Side A:
Everybody Needs A Littlle Lovin'

Merle Kilgore was born in Chikaska, Oklahoma but very young moved to Shreveport, Louisiana, where he gave his firt musical steps as musicians and DJ of the Louisiana Hayride.
From his earliest years Merle stood out as a composer, writing with only 18 years the Webb Pierce's big hit More and More.
Over the years Merle would pen a never-ending chain of big hits like Johnny Cash's Ring Of Fire, Johnny Horton's Johnny Reb, Tommy Roe's The Folk Singer or the crossover Wolverton Mountain, but also great rockabilly as Bob Luman's Loretta.

In 1954 Merle would sign up for Imperial Records, company with whom he would release his fist singles under his own name. Although country & western is the main ingredient at the begging, soon the rockabilly bug would bite strong into Merle's music and stinky guitar
and slappin' doublebass would become familiar in his singles, Everybody Needs A Little Lovin' and Ernie, both included here are good examples of it.
Interestingly, although Merle would succeed as a composer, these songs are signed by his wife Dorothy Lee Salley, who would also write for him the ballad Trying To Find (Some One Like You). Years later, in his stage with Mercury Records, Merle would record Every Needs A Little Lovin' in a much
more pop style and re-tittle as The Love Bug...